This is long about our day at the University of Guelph..

Firstly I wish to say that I met some absolutely fabulous students, animal lovers and purebred dog fanciers . If these young folks are any indication , our purebred  future is in good hands. Intelligent, articulate,  sensible and dedicated, my conversations with them were delightful and they were super charged with passion and dedication.
I’ve listed some interesting negatives, but also want you to know that I believe we did positively assist many families.
The collars, frisbees and bandanas ( thank you Purina) were a hit, (freebies are fun) the kids loved the candy bowl and the handouts were helpful as well as the business cards.
These are my some of my thoughts and experiences regarding the Guelph University dog show event…..firstly it isn’t a dog show in the sense that most of us would consider a dog show, as it is an obedience event. Students obedience train a donated dog for 8 weeks and then compete on the weekend of College Royal. The premise is excellent as it teaches student handlers to develop team work, focus and just love and respect for a dog. The ‘show’ is well attended by spectators and the seating area was always filled. It was our first time attending and the organizer that I worked with gave me explicit directions to the location and on arrival the area for our display was clearly marked with adequate table space and lots of chairs. Our table was right at the entrance, where there was high traffic area.
And now to the difficult part:
I would say that close to 50 % of the visitors to our booth were either doodle owners or were going to purchase one. Berndoodles, Labradoodles and golden doodles were the big order of the day. One really nice man was purchasing a berndoodle because he was sure it would be allergy free and non shedding since it was a second generation breeding and therefore those issues were vastly reduced. He had previously owned a Logotto and had also researched Barbets and PWD?? There was no convincing him to alter his thinking. The designer breeder had infiltrated his mind so well with hybrid detail that he was convinced.
A lovely lady admitted to purchasing a Morkie that she saw in a pet store window because it looked so sad. Price tag: $1400.00……Even though she had previously owned a Bichon and preferred that breed.
A really tough conversation for me was the nice lady whose Newf/ St Bernard cross bitch was in the show. She came to the table to ask about feeding regimens and the talk switched to breeding. She was contemplating breeding her to either a Newf or a St Bernard because somehow that would make the pups better. I carefully suggested that perhaps she might like to rethink the breeding idea at which point she bristled slightly, commenting it was her dog and she could do as she liked. There was no further way that I could warn her of the 10 possible pups, the magnjtude of food needed and the mountains of poop, nor the expense of vaccines and the need for homes nor the time and space required to raise a litter and the horrendous cost of vet care if there were whelping complications. It was another lost opportunity to save this lady from what might very likely be terrible heartbreak and tragedy.
And lastly and most astounding of the dozens of visitors to our booth: 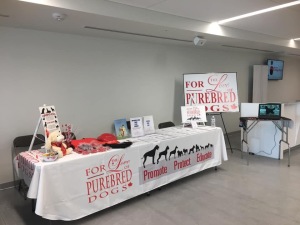 Two ladies passed by In the late afternoon, glanced at the material and signage, and one of them remarked something along the line of ‘so you are about purebreds’, then looked straight at me and said ‘I hate you’, I countered with ‘well I like you’ and she muttered again I hate you as she marched away. Oddly her friend turned back, whether from embarrassment or with a view to starting a further argument, asked us both if we watched Westminster, and then she too just simply turned and walked away.

Yes my friends, that was the ending to our day…….no chance for a rebuttal or defensive arguments or conversation. And In the several years that I have been representing us with the FTLOPD booth, that’s a new one!!!