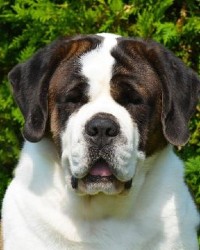 History and Origin: In the year 1050a monk named Bernard of Menthon created a hospice to house travelers as they crossed the Alps to get to Rome. Over the centuries a dog breed was created to aid those unfortunate ones who got lost or trapped by huge drifts or avalanches. The breed needed to be strong and sturdy, with a keen sense of smell. The Saint Bernard was likely developed from powerful Molosser types that were part of the Roman army, as well as native dogs. These ‘farm dogs’ were used as guardians, and for herding and drafting, and were used for centuries by the monks. Initially all Saint Bernards were short haired but the severity of weather conditions necessitated that the monks establish a long haired variety. The Saint Bernard Club of America was formed in 1888.

General Appearance: Powerful and massive in all regards including the head. This breed has huge bone, muscular shoulders, thick strong neck and broad thighs.   Ears are dropped to frame the head , eyes are dark with a friendly expression, back is broad and long tail is heavy and full coated.

Coat and Colour: There are two coat types:  short haired ( stockhaarig) in which the coat lies smooth, is very dense, not coarse, and with bushy thighs. In the long haired , the coat is medium length and may be slightly wavy, thighs and tail are very bushy. Colour may be white with red or red with white with these marking: white chest, white feet, white tail tip, colour or spot on nape of neck and a white blaze. Size: Males minimum of 27 1/2 inches (70 cms) females  minimum of 25 ½ inches (65 cms)

Feeding: A good quality kibble is a must for sucha large massive breed.An adult should be fed twice daily and young growing puppies up to six months even oftener. It is wise to curtail extreme exercise before and after meals. A nylon bone is a benefit for chewing exercise but avoid rawhide and hooves.

Training and Obedience: The Saint Bernard is not averse to training but like any massive breed he is more cumbersome and slower in his ability to work precisely. Obedience training is advisable from an early age so that such a large dog can be managed properly. And while he may not be a top scorer in an obedience competition, he will excel in drafting, carting, sledding and weight pulling competitions.

Activity: This breed will enjoy a walk and will love snowy days.  He was designed for working in the harshest and snowiest conditions so he is very much a capable outside winter dog. But that does not mean that he is to be housed outdoors away from his family. He probably won’t enjoy lying in front of the fireplace and in summer some care should be taken to allow him to keep cool in s a shady spot in the yard. His heavy coat affords him protection in winter and coolness in summer. Because of his large face and heavy lips, he will have a tendency to drool more so keep a towel handy especially after he has eaten or had a drink.

Temperament:  The Saint Bernard is a mild tempered, stoic, and sensible dog. He is seldom quarrelsome and does interact well with other dogs. He is gentle and patient and will be a good family pet but care must be taken around very small children or toddlers as he may accidentally knock them down due to his bulk.  He probably will do better raised in a country area or at least a sizeable home with a big yard as opposed to a cramped apartment. He does require room to move about. He is friendly and sweet and enjoys people and attention.