Our returning hero and his lady were present at the Woodstock and District Canine Association show on the weekend of Feb 20-22 . It was only just  mere hours since his stunning victory at Westminster Kennel Club  had thrust him into the spotlight and into the living rooms of millions of viewers. The WKC dog show is the second longest running sporting event in the US,  second only to the Kentucky derby.  In an effort to  recognize the world class event,   and our Canadian handler, the judges at the Woodstock show very graciously interrupted their Friday ring schedules  so that William Alexander could be presented to his friends and peers amidst  a standing ovation.

William piloted the lovely  15 inch Beagle,  fondly known  as Miss ‘P’ to  Best in Show  at this most prestigious dog show. Requesting a short speech,  William graciously acknowledged the accolades and in true sportsman style admitted that the win and the surrounding media attention was still surreal.  He humbly acknowledged everyone for their support and it was very evident that he still struggled with the enormity of winning such a huge event in the sport of dogs. We are all so very proud of the Canadian  breeders and  owners of Miss P and especially to Will for making Canada a proud purebred dog nation at one of the world’s most renowned dog shows.

‘For The Love Of Purebred Dogs’  is a Canada wide initiative,  by purebred dog enthusiasts promoting the benefits of purebred dog ownership.  Will and Miss ‘P’  have made a huge contribution to that effort with this victory and in the ensuing  media coverage which placed the beautiful beagle front and centre, owning the spotlight for all purebreds  in Canada and across the world!! 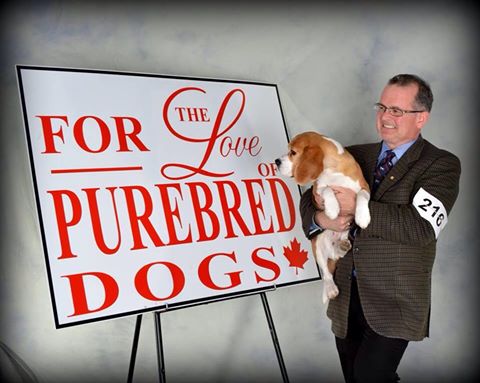