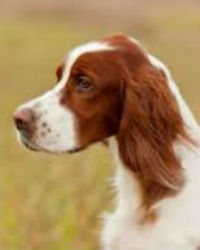 History and origin: The Irish Red and White Setter was likely the precursor to the Red Irish Setter that is so familiar. The Irish Red and White Setter was popular in Ireland in the 1600’s, with hunters who took them out to hunt in the bogs where the dogs displayed that peculiar style of ‘setting’ down on their bellies to indicate the position of the bird. The breed was pushed aside in favour of the typical red setter and was nearly lost to the world. But assistance from dedicated fanciers revived the breed in Ireland in the 1970’s. The brilliant red and white colouring has been favored by huntsmen as the dog is easily seen in the field. The Canadian Kennel Club recognized the breed in May 1999.

General Appearance: A fairly large breed of dog that is very athletic and strong without being either cumbersome or too racy. They were born to run and hunt and have a high level of endurance. They are a powerful and hardy sporting dog and are classified as a gun dogs just like their counterpart, the Irish Setter

Coat and Colour: Pearly white body colour, with islands of vivid red distributed randomly on the body. Ears are typically red and generally the face displays red markings with a white blaze. The backs of legs have longer fine hair, belly has a longer fringes, chest is covered with longer hair and the tail is full. The ‘furnishings’ are not to be too profuse. Coat care is relatively easy as mud and dirt tends to dry and brush off, but the longer furnishings should be combed through regularly to prevent tangling and matting particularly if the dog has been running in the open field.

Feeding: Balanced raw diet or any good quality kibble. Feed twice daily and avoid exercise for an hour or two before and after meals. Fish or omega additives add beneficial oils and fats that enhance the coat and general health.

Training and Obedience: easy to train and adapt well but need an early start. They Should not be allowed free running in the field until they are dependable on a recall. Crate training highly recommended from puppy hood and onwards.

Activity and Performance: This is an energetic gun dog and is prized as a hunter for upland game birds such as grouse, pheasant, quail and partridge . A fenced yard is a must as they can jump and can also climb. They are diggers. Plenty of exercise is required for this breed and they are recommended for an active outdoor family. As with many sporting dogs they are triggered to pursue by a passing squirrel, deer, or rabbit. They can excel at many of the performance sports and can adapt to water retrieves. The breed is a loyal family dog that must have daily exercise but also enjoys quiet indoor time with children and other pets.